Class 6d on a Survival Trip

At 8 o’clock we met in our classroom before our class trip. Mr Krabbe said: ”Let’s go to the underground!” We took our bags and went to the underground. Then we drove with a different train to a train station in Großenaspe. Three instructors waited there. Then they took our bags in a car with a pendant and it drove to Eekold. We were all very excited because the class trip started. We walked six kilometres and on the way we sang a lot of songs. We made only one break to eat our lunch. When we arrived at Eekold, the evening began.
(Felicitas Bugiel, Johanna Spandl)

On the first day we walked a lot. Then we had lunch on a little picnic place with cows, a bench and a high wood tower. First the coaches collected our watches, then they distributed maps to three kinds. After that we had lunch. We could go onto the tower too! It was very exciting and high. But when we were on the top, the tower began to shake, but only a little bit. The view was wonderful. You could see a very big part of the forest! When we were back down, we fed the cows with apples. It was much fun. That was our first lunch on the class trip.
(May Drews, Phoebe Grulert)

When we were in the Eckolt Zoo, we chose groups to make breakfast and dinner. On some days the instructor Felix went with us into the forest and each of us stood next to a tree. We had to be quiet and listen to the trees and the birds. In the afternoon we had to assemble our tents and tarps. After that we decided who slept in the tent and who slept under the tarp. At the end of the day we sat together at the campfire.
(Carla Metelmann, Louisa Hansen)

The Red Deer and the Wolf

It was on the second night of our class trip. We stayed in the dark, scary and cold forest. We were five girls under the tarp. It was the middle of the night when one of us woke up from a howl. Lucia was the only one who was awake. The rest of the girls snored so loudly that she laughed a bit. But when she heard the howling again she got very scared. The howling sounded like a wolf’s. “What happens when the wolf comes and he wants to eat everyone? I’m too young to die!” she thought. Lucia tried to wake up the other girls, but that didn’t work! Nobody moved! Finally one of us moved. It was Josephine. With her eyes closed she sat up straight and said: “Wuff!” But after that she fell back to sleep. Too bad! No chance! The howling became stronger and stronger. Lucia was very scared. Then suddenly Elisa woke up. “What’s happening?” she asked. “I think there is a wolf!” Lucia answered. But Elisa didn’t hear anything. Maybe it was because she was still half asleep. After a few minutes Elisa also began to hear the howling. Now she was scared too. Lucia began to cry: ”What can we do?” “Maybe we can ask Ms. Erdmann!” Elisa answered with a trembling voice. So they walked to Ms. Erdmann. She told Lucia and Elisa that this is just the red deer that is in mating season. The two girls quickly ran back to the tarp. “OMG! We’re so lucky!” Lucia said. But then she saw that Josephine woke up. Lucia and Elisa told her the whole story and laughed a lot. “How can you be so silly?” Josephine asked. They chatted for about ten minutes and then they tried to fall asleep again. But suddenly they heard a loud rustling noise near by. Maybe that’s a real wolf…
(Lucia Nilsson)

It was dark, everyone was asleep. We slept in a tent. Then a boy woke us because he heard a howl. The howl was our signal to come together in a circle. But it was a real howl of a wolf!! But the boy thought it was the signal. That’s why he woke us. But the other children slept. We told the boy that it isn‘t a fake howl, but he didn‘t think so. After that he believed us and we were so mad at him!
(Constantin Dethloff)

On the 4th day of our trip we went to a bird show. In the entrance there was a wooden house with souvenirs. In the small stadium there were seats for 100 people, but we were round about 50 people. In the show there were 7 different birds: We saw an eagle (a white-head-sea-Eagle), different falcons, an eagle owl and an owl. The birds flew over our heads from one guide to the other. It was fun and scary.
(Mats Wulkop)

On Thursday after dinner we played a game. A creepy game: We were not allowed to go into the dark forest! But of course, we still went. Typical for me, I walked into the compost. Then I ran into a fence. I leaned against the post and began to whistle a little song. Suddenly I heard a growl. Was that a wolf? A bear? Not important! I ran away as fast as possible! I was very relieved when I saw the camp fire.
(Gero Schiffauer, Arvid v. Alt-Stutterheim, Christopher Bruce)

On the last evening of our class trip we went on a night walk. It was a really dark night… The first five minutes we all walked together. Suddenly Mr. Krabbe stopped on a crossover and we had to stand in one line and close our eyes. He tipped some kids on their heads and they should go to Ms. Erdmann. The other children stayed with Mr. Krabbe, like Ole and me. The “Erdmann Group“ went first on a so-called “Zombie Path.“ On this path they wanted to shock us, the “Krabbe Group”. The path was small and not too long; it was a bit difficult to see the ground. Suddenly we saw a torch and sneaked slowly. It was so quiet.

But there was a misunderstanding between the teachers. So they couldn’t scare us! After that they went the “Zombie Path“ and we ran back to the camp. Funnily enough we were faster and could scare them.
(Ole Lafrentz, Pax Rech)

On the last day of our classtrip – it was a Friday – we went to the Team Tower. It was very high: 30 meters! Most of us were very scared. The coach split us into two groups. One group went to free falling. It was on the first platform: 13 meters above the ground. We gathered all of our courage and did the one step into free falling. 17 meters over this group the other group went zip-lining. There we had to work up our courage too. It was hard, cool and a lot of fun at the same time. It felt like flying. After this amazing adventure we were all proud of ourselves. But we were happy to got back home to our families after this exciting week in the great outdoors.
(Lisbeth Andresen, Elisa Eggers)

Our class trip was great! We had fun. The first and the last day we had a big bonfire. On some days it was very wet in the inside of our accommodation and in the mornings it was very foggy. We had to make our food ourselves, but on the last morning the teachers and the survival trainers prepared breakfast for us. One of the trainers was a hunter. She told us a lot about special berries. Some berries are very poisonous and inedible. In the end we all were very tired. We thank all people for their help and that they organised this very special, exciting and a bit straining class trip.(Chiara Gross, Emilia Best)

The egg challenge was a challenge where we had to put an egg in natural things. And at the end our instructor threw the egg with the natural things into the sky and the egg had to be safe. We think it was a good challenge, but some people didn’t make it. We all gave the eggs names. We also wrote a story about what happened to our egg that day.
(Johann Böttcher, Oskar Höhne) 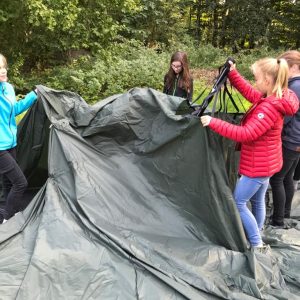 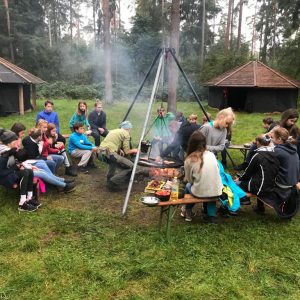 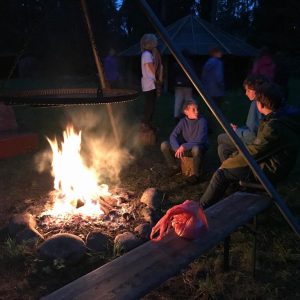